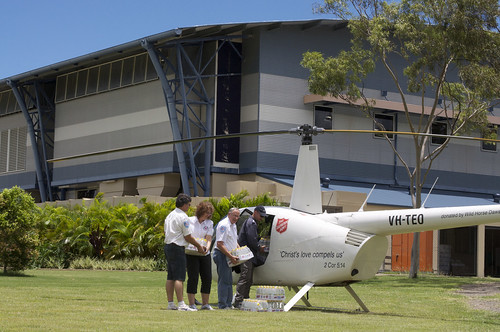 Emerald, Australia – It was mid-evening on January 4th as Majors Don and Eva Hill arrived home from another energy-draining day of feeding physical and spiritual food to flood-ravaged residents of a small Queensland town that had become an inland island.

The retired Salvation Army officers were exhausted. They had barely had a break since floodwaters entered Emerald (17,000 population) in central-west Queensland just after Christmas Day.

The Hills were looking forward to a sleep-in next morning. Salvation Army reinforcements had arrived from Blackwater – flown in by helicopter because it was the only way to reach the town located on the Nogoa River, which bisects Emerald’s main street.

Other Salvation Army support was coming from Cairns, Canberra and Brisbane. The Salvation Army’s Flying Padre helicopter from Mt Isa was also involved.

Almost every day for two weeks, Don and Eva – relieving officers at Emerald Corps – served breakfast, lunch and dinner to hundreds of residents evacuated from their homes engulfed by the floodwaters. 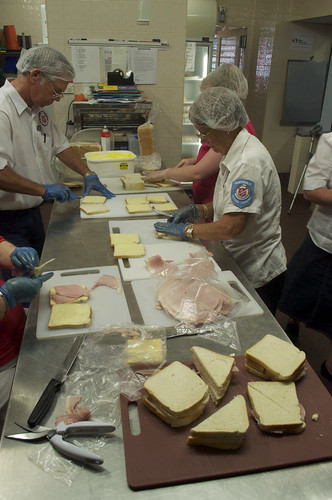 For most of late December and early January, Emerald was the worst affected town of a flood that turned a part of Queensland— the size of France and Germany into a sea.

So damaging were the floods that Emerald Mayor Peter Maguire estimated it would take up to two years for Emerald to recover. Emotionally, many residents will take much longer. Everything they owned has gone.

Don and Eva Hill officially retired from Salvation Army officership in 2007. But they have always been available to serve where it helps. They answered a call to oversight Emerald Corps last July until new officers could be appointed in mid-January.

They had arranged two weeks leave at the end of November. But on December 3rd, the Hills received a call that ended their leave early. Emerald was in terrible danger.

Although, as flying padres for nine years shortly before retirement, they had been through floods and famine many times, this was the worst.

‘It breaks your heart,’ Major Don says after spending another night at an evacuation center.

Don Hill is an experienced officer. He has learned that in a crisis, there is a job to be done. It’s apparent from our conversation that he doesn’t dwell for long on a disaster. Nor does he allow the emotion to affect the job he has been given.

His corps was on the least-affected eastern side of the main street bridge, which, by December 30th, was under water. With the local council in charge, an evacuation center was quickly set up to accommodate evacuees.

He gathered his corps membership – just a handful of devoted Salvationists. They got a feeding program in place. Some crossed to the other side of town to assist at other evacuation centers.

From early morning to late night, they worked to help locals dispossessed of home and possessions to cope through the worst flood in Emerald’s history.

Don’s evacuation center was handling up to 160 residents at any one time. Across town, 300 people were cramming into other centers.

At first, food was hard to find. Local residents had been aware since early December that devastating floods were on the way. Shops were selling out of food quickly as locals prepared for the water to enter their town.

There were times, Don confesses, when he wasn’t sure if there would be food for the next day. But it just kept turning up – day after day. 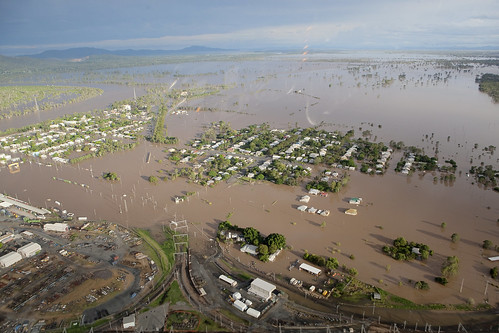 ‘I don’t know where it was coming from,’ he said. ‘But it came. Our evacuation center was at the local agricultural college. We were given the support of the college’s two cooks and kitchen. One day when a truck pulled up with a load of food, one of the cooks who is not a professing Christian said: “God must be real.”

‘I must say that I thanked God with all my heart at that moment.’

The night we talked, Emerald’s main street bridge began to re-emerge from the muddy waters. It was a hopeful sign. Although the Blackwater reinforcements would allow Don and Eva a few days respite, Don was looking forward to the morning.

‘It’s important that I get over to the other evacuation centers to make sure that our corps folk are OK,’ he said.

‘We’re tired; yes. We wish it would all just go away; yes. But we have been sent here [Emerald] as Salvation Army officers. We have a job to do. And with God’s help, we will continue to do it until it’s time to hand over to somebody else.’

Photographs from Emerald and others are available on Flickr.